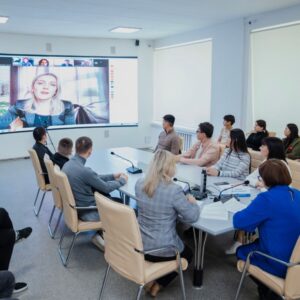 On April 6, 2022, the Round Table of the scientific community of partner universities was held on the basis of D. Serikbayev EKTU (in the online-format on the ZOOM platform). It was dedicated to discussing issues related to current problems and tasks of electric power industry.
The participants of the Round Table were students, Master’s Degree students, doctoral students and teachers of the Nuclear and Conventional Energy Technologies School (EKTU), as well as representatives of partner-universities. The geography of the Round Table was extensive. In addition to universities of Kazakhstan from Pavlodar and Almaty, partners from Russian universities — Moscow, Kazan, Novosibirsk, Vladivostok — joined online: National Research University ‘Moscow Power Engineering Institute’ (NRU MEI, Russia), National Research Nuclear University MEPhI Institute of Atomic Energy (IATE NRNU MEPhI, Obninsk, Russia), Kazan State Power Engineering University (KSPEU, Russia), Novosibirsk State Technical University (NSTU-NETI, Russia), Marine State University named after G.I. Nevelsky (Moscow State University named after G.I. Nevelsky, Vladivostok, Russia), NAO ‘Toraigyrov University’ (Pavlodar, Kazakhstan), Almaty University of Energy and Communications (AUEC, Almaty, Kazakhstan).
The moderator of the Round Table was Natalia Denisova, Vice-Rector for Research and Digitalization of еру EKTU. At the opening of the event, she noted that energy issues are of high importance in the light of energy security and energy self-sufficient of any country, and for continuous, qualitative and efficient energy delivery, it is necessary to develop both new technologies and timely decision of applicative industry tasks, as well as interaction and collaboration of scientists and universities.
As the range of issues under consideration has shown, energy scientists are facing relevant and important research in the areas presented. In conclusion of the Round Table, the scientists of the EKTU put forward an initiative to organize an ‘International electronic publication on electric power industry’ and invited everyone to cooperate.

More information on the EKTU site.